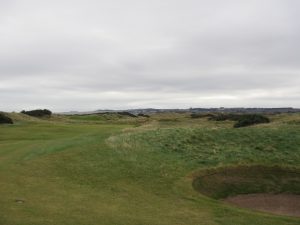 Our last day for golf in Scotland, tomorrow we fly out.  We had a noon tee time booked on the Jubilee Course, however we were hoping to get queued up on the New Course and get out by 9am or so, that way we could get to Glasgow, get checked into the hotel and get the van returned so that tomorrow won’t be so crazy.  Trevor was great and got up early, fixing us big breakfasts for 7:30, and we were off to the clubhouse to queue up a little after 8am.  We get there, and there is nobody else!  We can go straight out.  A quick payment of 70 quid and the cancellation of our tee time at noon, and we were teeing off on the New Course. 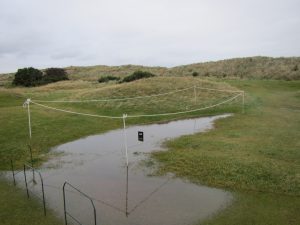 The front nine starts out with a short par 4 of 299 yards, however I found the fescue and 3 putted (it took a while to get used to the green speed after yesterday) on my way to a triple bogie 7.  I pared the next hole, but doubled the first par 5 after getting into the fescue again.  I started to hit the ball better, and finished the front nine with a 45, however my drives were much better than any other day, hitting 6 of 7 fairways. 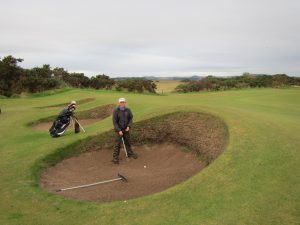 The back nine has some great holes coming in, with most of the length on this half.  I hit less fairways (3 of 7), however scored much better with a great flop shot on the last par 3 over a bunker and a couple of great hybrids into greens.  My putting also improved with only 12 putts on the last nine holes.  The shot of the day, however, was a 60 yard bump and run to 2 feet to save par on #16.  I played the last nine holes in 38 (3 over) for a total of 43, which was my best round of the trip.

After the round, we had lunch in the Links Clubhouse, picked up a couple of souvenirs and got into the car to make our way to Glasgow.  As we walked out into the parking lot, the rain started.  We finished 9 rounds of golf in Scotland in October and did not get rained on once while we were on the course.  We got to Glasgow where we checked into the hotel and returned the rental with lots of time to spare.  During the ride, talks of the next trip started as we still needed to play the Old Course and Carnoustie.