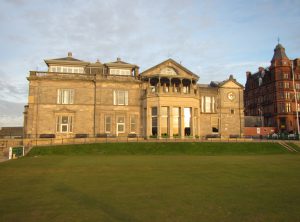 We’ve finally arrived in St. Andrews after driving a couple of hours from Troon, just south of Glasgow.  We got checked in and immediately went walking down to the Old Course here in St. Andrews.  It is really magic.  The grass seems to be a different colour, the setting sun is shining on the R&A, everything is perfect.  Well almost perfect, we didn’t make the ballot, so we have to play Kingsbarns tomorrow instead and try again on Saturday (our last day).  Wait you ask, what happened at Royal Troon?  Let me step back…

We woke up this morning to another spectacular day.  As we were having breakfast at the Miller Guest House, there wasn’t a cloud to be seen in the sky (which proved to be a bit challenging as the sun was in our eyes for the first eight holes).  Driving out to Troon confirmed that the weather was spectacular.  We arrived to

the course a bit early and used the driving range to warm up a little.  This is only the second course to have a range, and we were glad to loosen up a little before what was surely another knee-knocker of a drive.  We then got all checked in, were given our engraved bag tags, and headed out to meet Bob, Jeff’s caddy for the round.  Bob was a ball hawk extraordinaire, with uncanny abilities to track balls in glaring sunlight to inches of where they lay.  With his help, we played the round in about 3:45 as we never spent more than a couple of minutes looking for balls.

This is a spectacular course with almost as much history as Prestwick (unlike Prestwick, Royal Troon does not have their own Claret Jug on display).  I tried to play smart after Prestwick and attempted to stay out of the fescue which killed me the day before.  That plan included hitting hybrids off the tee on shorter par 4s (I was hounded about this on 18 by the guys who ended up in either the deep stuff or the larger fairway bunker that they had to come out sideways from), which I always made par on.  I even managed to birdie the first par 5.  The front nine started well, and I was a solid +2 through 6 including a double on #3 when I put my second shot into the burn from the fairway bunker.  Then the

road got bumpy very fast.  Into the fairway bunker on 7 (took 2 to get out), then pushed my approach into the deep grass next to the green.  End result – Triple bogie.  Then #8, the Postage Stamp.  Everyone was going long with the wedge, so I choked down a bit, came up short into the deep grass, instant double.  Then on #9, I shanked my approach into the greenside bunker after out-driving everyone by almost 30 yards.  Three to get out of the bunker and one more to get down – Double bogie.  +7 for the last three holes on my way to a 46 on the front.

Then the back starts out well… Bogie 5 on 10, par on 11, and then a shank into the deep rough on #12.  Triple.  Same thing happens on #15.  Finished up the backside with a 44 with 2 triples.  So a smooth 90 with 3 triples and 3 doubles (+15 on six holes)  I love this game so much!!!  We then went into the clubhouse and had a great meal.  All said and done, Royal Troon has moved into second behind Turnberry in the current rankings (with Kingsbarns, Muirfield, Carnoustie and one other, hopefully the Old Course, to go).  It was also neat to bump into a guy from a game manufacturer (which I will not name) who was taking pictures of Royal Troon for reproducing within their game.  That will be great fun when that comes out!

Froggyson’s recommendations have been perfect so far.  Trevor and Jacqueline (the proprietors of the Brownlees Guest House here in St. Andrews) have been great.  There is an alleyway right beside them that pops out on the street that runs down to the R&A.  Absolutely perfect!!!  So after finding a bar to have a bite to eat and some beer and scotch to drink, it is time to head for bed with Kingsbarns on the plat in the morning.