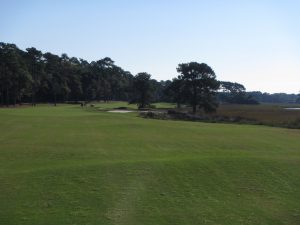 Cold.  Did I say it was cold?  People were bundled up like it was the next Ice Age.  And it was early.  I think a few hardy individuals came straight from the bar.  Whatever it was, the cold or last night’s libations, Pearl West took a bite out of almost everybody.

Paul, Nick and BKMgr braved the cold and wore shorts.  It was so cold even I wore long pants, although by the  early holes of the back nine, I had removed my jackets as it had grown quite warm.  Unfortunately my golf game did not…  An opening triple 7 with a ball pulled into the left trees on #10, that was followed up by bogie, triple, double before I got my first par on the #5 par 5.  Then it was bogie, double, double, double for the rest, ending with a solid 52.  Now the game was on, try to keep it under 100…

The back nine started a bit better after grabbing a bite to eat at the turn.  I started strong with two pars and two bogies to start.  I almost birdied the long par 5 #3, and I thought my game was coming into form, however that did not come to pass.  A bogie, double, bogie, double, bogie haunted the end of my round because of some fat shots for 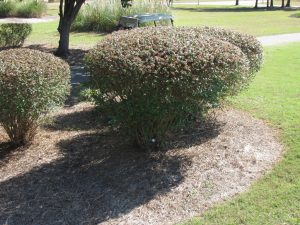 a 45.  That being said, I finished with 97, so under 100.  Scores were generally much higher today, so I am taking that solace at least for my worst score in several years.

The course was in pretty good shape.  There were some greens that had some bad spots that were covered in sand.  The staff was very friendly and the pace was really pretty good considering the high scores.

One of the highlights was on the Par 3 #8 when Dave’s (not me, the other Dave)tee shot ended up in a bush to the left of the green.  The picture is to the right

Tomorrow is our last round of the outing, and it will be cold and early once again.