We were scheduled to fly out of Houston Hobby on Southwest to Charleston on Thursday (9/27/20), but due to hurricane Laura our flights were canceled and rebooked for following day. We had absolutely no wind or rain in Houston on Wednesday or Thursday. Flew out of Houston Hobby into Charleston on Southwest on 8/28/19. First leg of trip to Dallas was uneventful, plenty of empty seats including keeping the center seat open. Nice having whole row to yourself. Flight into Charleston was kind of interesting. The pilot was retiring and this was last flight out of his home base, so flight crew had plane decorated with streamers and balloons. They then passed out index cards to everyone wanting us to give retirement advice to the guy. They also passed around a safety card for everyone to sign.

Flew back to Houston on 9/5/20 on Southwest through Dallas from Charleston. Got put into a holding pattern flying into Dallas due to a thunderstorm but delay was not too bad. Flight into Houston uneventful. Get to parking garage and greeted by low batteries in Rick’s pickup. Managed to get the bus driver to come give us a jump to get us on our way.

8/29/19 - Played Grande Dunes Resort course in the morning. Course was in good condition, did note it was wet in spots, rough thick, greens good. The wind was up today which made the course play a little more difficult than it actually is. (87)

8/29/20 – Arcadian Shores in afternoon. First time here since new greens and other improvements. As others have said the course is much better now than it was a few years ago. Was supposed to be a 90% chance of rain starting around 4, we got rained on 17th hole and was done by time we got to 18th tee box. (86)

8/30/20 = Pine Lakes – Got off a little late and pace of play was slow due to member/guest shotgun tournament ahead of us. Pace picked up as they got finished. Played and scored well so think I’m ready for the tournament. (79)

8/31/20 – River Club – first year we did tee times instead of shotgun. Pro here made it hard on himself and resulted in getting a little behind. He would brief a tee time on #1 then walk across practice green to brief same tee time on #10 repeat over and over. He should have positioned himself to brief tee time for front and back at same time then send them to the tee. Course was in good condition, my game was not. Not sure why but I was spraying my drive to right, trees were friendly though and threw several back in bounds that should have been ob. Pace of play right at 4:10. (91, in 21st of 33 in flight).

9/01/20 – Crown Park – Course was in overall good condition, greens were slower than yesterday. Where there were bad spots on course they had done a very good job of marking as ground under repair where warranted. Remembered how to swing the club for the most part here. Pace of play 4:00. (75, moved up to tied for 8th)

9/02/20 – Arcadian Shores – As on Saturday course in good condition. Greens were faster, pro stated they had mowed yesterday and rolled this morning. Lose my swing again, got off tee fine, but then problems began. Pace of play 4 or little less. Funny, just like on Saturday it started raining on 17th hole but this time lasted until we teed off on 18. (91, drop to tied for 11th)

9/3/20 - Tidewater – Beautiful course in very good condition. Greens were good speed and would run out on downhill putts. First 3 days I putted great, here not so great. I had the speed on the practice green, on course I was running past 4 or 5 feet and then pulling or pushing the comeback putt on several holes. (88, finish tied for 15th)

9/04/20 - Blackmoor – we were supposedly first time on back nine but there was a group ahead that was only playing nine holes. They were very slow on #10 but then picked it up ok, when we made turn we were right behind last tee time on front so I guess they paced us well so we did not have to wait. I know its boring and I’m not giving any great info but as with all courses was in pretty good condition. I enjoy this course and played better than my score. (86)

9/04/20 - International – Due to good pace of play we are 2 hours early for our tee time. We grab something to eat (not great) and they get us out early. Again course in good condition. It was coming up on 3 weeks since they aerated the greens, they still looked a little bumpy and sometimes putted that way, but nothing to worry about. (81)

9/5/20 – Litchfield Country Club – tee time at 08:15 but actually got off a little early and was done in a little under 4 hours even though waited on every shot. Course is starting to show its age, brown spots, slightly bare spots, but greens had good coverage, maybe a tad slower but I putted them well. Good target golf type of course some hole with trouble on both sides so have to position your tee shot. (79)

Doubletree Inn - third year staying here. They had a worldam rate in previous years we had a full breakfast buffet. With covid they did grab and go which was not too bad. Had a different variety of egg sandwich every day (egg mcmuffin, croissant, biscuit, etc) and apple or banana, blueberry muffin, orange juice.

No convention center this year due to Covid, but did not venture out to much. We ate at Outback one night, they had every other table closed for social distancing, we got lucky and walked in right when they were calling for a group that evidently had left so we got seated without waiting. Also did Fuddruckers one night. Went to Harry the Hat for taco Tuesday, a yearly tradition. Also had the lunch special of the day the next two days after round. I also hit Arby’s a couple of times for a quick snack, don’t remember the last time I ate at one, always have loved the potato cakes.

When we checked the long term weather forecast before going was excited to see highs in the low 80’s. As usual weather people were wrong, was one of the hotter/humid years in recent past. Still cooler than would have been here in Houston but did do some good sweating. No real rain issues. 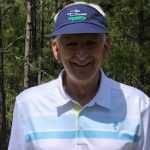 The single carts was good for pace.   Nice 75 at Crown Park.

Did you notice any other covid changes/thoughts, like not touching
your bag, must leave pins in, doughnut in hole, etc.

Thanks for your report!

*** Please Show Your Appreciation For MB Advice/Info In MBGT With Your Course or Trip Report! ***

Yes, we were not allowed to remove the flagsticks, they all had some type of filler (pool noodle, foam, pvc, etc). Range balls were provided and already on range to minimize interaction and touching. Had to wear mask to enter the club house. Forgot to mention although first 3 days pace was excellent, that at Tidewater the pace of play was not great. Don't know if the guys in contention were grinding or what but they sent us out as a foursome as we had 2 no shows in last 2 tee times. We waited on every shot and was close to a 5 hour round. Really missed not having the 19th hole at convention center, but we still had a lot of fun.

Also evidently they were expecting a big crowd for labor day weekend (or some other reason) but they put up traffic cones and fences to make ocean boulevard one way and blocked off many of the roads that you usually cut across from bus 17 to ocean boulevard. Have not seen them do that in previous years.

Quite a report.  Thank you!

Also evidently they were expecting a big crowd for labor day weekend (or some other reason) but they put up traffic cones and fences to make ocean boulevard one way and blocked off many of the roads that you usually cut across from bus 17 to ocean boulevard. Have not seen them do that in previous years.

Golf is just an excuse to drink whiskey and smoke cigars

Nice report on WA thanks for sharing you did play some nice scores.

That's a solid trip report @Jeff, thank you very much!

I will get off my fanny and do my trip report hopefully.  My report will be he same as Jeff's except for the tournament rounds and my scores which were pretty bad this year.

Yep, had not noticed any issues with my truck but when we got back would not start.  Took some doing to get it jump started...diesel with 2 batteries.  NTB replaced both batteries yesterday.  Only a little over 2 years old so got prorated price.

This forum is very valuable to us because of reports like this.

They are very much appreciated.

"King Of The Mid-tiers"

Thanks for the update!

Thanks for the report. Always interesting to read the World Am reports.

A very interesting report Jeff. Congratulations  for the score at Arcadian Shores. I agree that AS has turned the corner since at least 3 years. A vefy good value now. It should be fun to play in this tournament. Thanks for reporting to us.

Golf is a game. We play it. Somewhere along the way we took the fun out of it and charged a premium to be punished.- - Ron Sirak